Today it is easy to reach out to all the necessary ingredients needed for the Passover celebration. But a bit earlier, until the mid-1960s, things were quite different. Thanks to Karina’s article, we learned a lot of interesting facts!

Despite the difficulties, the communities baked matzah in synagogues, homes, and even Russian ovens. The strictest control then was over the Riga community, where Jews from various cities often came to get matzah. In 1947 the authorities restricted the community’s access to flour from the state fund — any believer who wanted matzah had to bring his flour, which the community passed on to the trusted bakery.

Plenty of obstacles was made to keep the community out of the making and distribution of matzah. In 1949 the baking was taken over by a trust of the Ministry of Food Industry, which allowed only one observer from the community to participate in the process. The local authorities accused the community of speculation and put up other allegations, but in 1950 the community organized matzah production through one of the cooperative association.

Unfortunately, in 1959 the second wave of restrictions started. It was a part of the anti-religious campaign. Soon the premises of the factory, where the community was making matzah, were visited by the Sanitary and Epidemiological Inspectorate and found several absurd violations like: “there was flour in the air and on the floor, everything was stained with dough.”

In 1960, baking matzah was already banned throughout the LSSR and could only be purchased in Vilnius, Leningrad, and Minsk.

However, despite all obstacles, matzah was baked clandestinely in the Riga synagogue, and once a worker of the Israeli embassy brought it in large quantities. The community withstood the pressure and became larger and more united.

Take a look at the piece of matzah you’re eating today — imagine the hard way our ancestors had to go to make it easy for us to maintain the traditions and enjoy the holiday. Let’s thank and praise them together!

Special thanks to Karina Barkane-Vinzane for providing the materials! 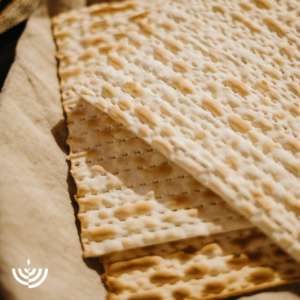